The introduction of trifluoromethyl groups into drug molecules can effectively prolong the duration of action and enhance the metabolic stability of the drug molecules. Therefore, compounds containing trifluoromethyl groups have been widely used in the pharmaceutical field. For example, Prozac, a drug for mental depression, Cilazapro, a drug for arthritis and Genovent, a drug for type II diabetes, Sorafenib tosylate, an anti-cancer drug, and Fluoxetine, an anti-depressant, all contain trifluoromethanes and have the structural formulae shown in Figure 1. 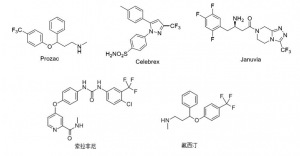 Trifluoromethyl compounds have a footprint in many therapeutic areas, for example, aliphatic compounds that act as anaesthetics, as well as phenothiazine tranquillisers and antiemetics, benzothiazide diuretics, and some compounds that have not been clinically evaluated, such as antihistamines, antiasthmatic, antimalarial and anti-staphylococcal.

5-Trifluoromethyluracil (TFU) is a key intermediate in the synthesis of the anticancer drug trefoil thymidine. Triflumethymidine is a spectroscopic antiviral drug that inhibits herpes simplex virus and herpes zoster virus, as well as HSV-I,HSV-II, CMV, varicella virus and certain adenoviruses [1].

α,β-unsaturated structures appear in many important pharmaceutical synthesis intermediates, and the trifluoromethylated products of α,β-unsaturated aldehydes and their derivatives can be hydrolysed under specific conditions to produce active trifluoromethyl ketone structures [6]. 2009 MacMillan’s research team at Princeton University used CF3I as the trifluoromethylated structure catalyzed by an organic small molecule catalyst and a photocatalyst to The reaction route for the introduction of CF3- into the α-position of an asymmetric aldehyde catalyzed by an organosmall molecule and photocatalyst is shown in Figure 2.

Figure 2. Introduction of CF3- to the α-position of an asymmetric aldehyde using CF3I as the trifluoromethyl source

Trifluoromethyl ketones are a particularly important class of compounds among the many trifluoromethyl-containing molecules, with strong biological activity as inhibitors of a variety of enzymes; they are also important intermediates for the synthesis of other trifluoromethyl derivatives.

[1] A method and process for the preparation of 5-trifluoromethyluracil.